I'm Back from Vacation, and I'm Moving

...over to Wordpress!  Please follow The Full Table to its new home, where I'll be posting about once a week.  See you there!
Posted by beckim82 at 1:49 PM No comments:

I've always loved the recipe for Shrimp Fra Diavolo in my America's Test Kitchen book.  It involves a whole bunch of garlic, a simple tomato and wine sauce, and lighting some shrimp on fire.  Over time, I've simplified it a bit to make it a simple but upscale weeknight meal.  Usually it calls for a can of tomatoes, but it being summertime and all, I decided to try out a fresher-tasting version. 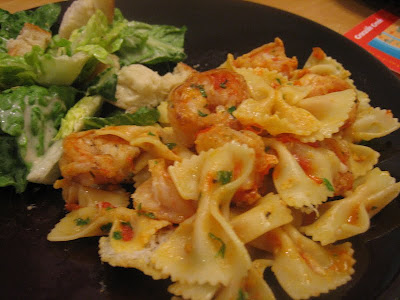 Shrimp Fra Diavolo, Summer Edition
Half a pound of pasta (the original recipe suggests linguine, but I pretty much always use farfalle these days to make things more kid-friendly)
6 garlic cloves, minced
About three large fresh tomatoes, finely diced (and seeded if you prefer... I don't bother)
1/2 cup of dry white wine (something you would actually drink)
1/2 teaspoon sugar
1/2 teaspoon salt
1/2 teaspoon crushed red pepper (if you take your spice seriously and want to make this extra fresh and summery, you can use a real hot pepper!)
1/2 pound large shrimp, peeled and deveined
Extra salt
About 1/4 cup cognac
1/4 cup fresh parsley, chopped
Parmesan or Romano cheese, grated to taste
Boil the pasta.  In the meantime, heat some oil on the skillet over medium-low heat and saute five cloves of the garlic until it turns golden.  Add the tomatoes with their juice, then the wine, sugar, salt, and pepper.  Increase the heat to medium-high and simmer it until much of the liquid has cooked off and it looks like about the right amount of sauce for your pasta... somewhere between 5-8 minutes.  Toss the pasta with the sauce and the last clove of minced garlic.  Yup: RAW.
Clean out your skillet and put it back on the burner over high heat.  When the pan is smoking, add a couple tablespoons of olive oil and then the shrimp, making sure they are all in a single layer.  Sprinkle them with just a couple of shakes of salt, and don't turn them for about a minute so they can brown nicely.  Once they have, turn each one over and add the cognac to the pan.  It should burn off pretty quickly, leaving the shrimp with a sweet, delicate essence.
Add the cooked shrimp to the pasta and sauce, then garnish with the chopped parsley and cheese.
This serves two hungry adults.
Posted by beckim82 at 11:50 PM No comments: 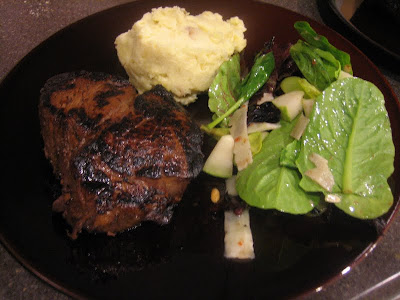 It basically looks like a normal steak, right?  It's a filet, so unless I overcooked it, it's probably pretty good.  But how different could it be from any other steak you've enjoyed?

Well, I love a good steak, and this may have been the best one I've ever had.  I think it's official: this is the only steak marinade I will ever use: one part Worcestershire sauce to three parts soy sauce to six parts hoisin sauce, plus ginger to taste.  I'm not exactly sure how long the marinating process needs to take to achieve these results... I gave these steaks 24 hours.

I didn't want John to have to grill on his special day, especially because I think our grill needs a good cleaning.  So, paying no heed to the inefficiency of using the oven during summer in the South, I heated up my ovenproof skillet, seared the steaks on both sides over the range, then let them cook in the oven at 450 degrees.

Now despite what I've said so far, if I claimed that process went off without a hitch, I'd be lying.  First of all, I got my skillet so hot that the steaks started to char before they could really establish a good crust and cook for the full three minutes per side recommended by most how-to guides I've seen.  It ended up being only about a minute of searing per side, then I put the pan in the oven.

You may not know it to read my blog, but my husband and I have very similar tastes.  He and I have shared many of our best times over food.  We do have one major disagreement over the alleged satanic qualities of onions, but other than that we generally say "mmmmmm!" to the same concoctions.  However, when we order steaks at a restaurant, I make sure to eat mine so that only I can the inside of it, because my man just can't help but be a little repulsed by the idea of raw beef.  I order medium-rare, but I'd never send it back for being even redder than that.  But he likes a good, solid medium: pink enough so that the meat is still moist and tender, but cooked enough that a clear unraveling of proteins has occurred.  So I took my steak out after about six and a half minutes, and I gave John's steak eight minutes.  When you pay upwards of $20 per pound for filet, you damn well better not overcook it.

Well, mine was on the rare side of medium-rare, and I loved every second of it.  My husband loved his, too... until he started to get closer to the middle.  No problem, I said.  Stop right there, let the oven preheat, and we'll pop it back in.  That turned out to be a little bit more complicated than I anticipated: we had to take it out, test it, and put it back in three times before it looked good to him, and even then it was still slightly too red.  The steaks were pretty thick, after all.  Especially in light of the reduced searing time, I probably should have left his in for a good ten minutes the first time.  It sounds like an ordeal and maybe a disappointing Fathers' Day dinner for him, but he would want you to know that regardless of the cooking issues, the flavor on those steaks was amazing.

I made a compound butter by softening half a stick, mixing in some lime zest, garlic, Worcestershire sauce, and ginger, and re-chilling it in the fridge the day before.  Given how incredible the steaks tasted, it was completely unnecessary, but a nice addition all the same.
Posted by beckim82 at 3:48 PM No comments: 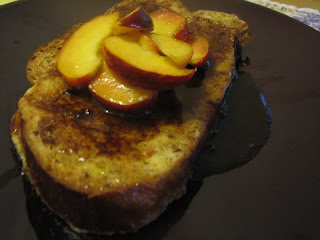 One of the great things about French toast is that you can make it with just a few ingredients that are almost always on hand: bread (even stale), milk, and eggs.  My husband loves a hot breakfast, so he is usually the one to treat us to French toast in the morning.  When he wants to make it special, he might add some cinnamon and vanilla.

This Fathers' Day, I decided to make three significant improvements over our normal weekend fare:


I can't take credit for any of these ideas, unfortunately.  Check out my sources at Epicurious.
Posted by beckim82 at 2:57 PM No comments: 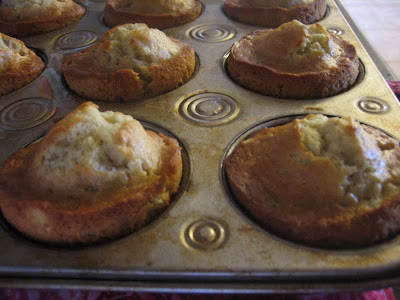 Well, it finally happened.  Two of our bananas turned brown.  Usually, bananas are the reason I go to the grocery store.  Both kids often want multiple bananas for breakfast (although they only get one each), and if either John or I have one, they're gone in two days.  I don't know what happened this time, but I was thrilled to see those brown speckled bananas.  It meant I could make my famous coconut-banana bread, and then blog about it.

Or... not.  Because you see, a loaf of banana bread takes an hour to cook.  And wouldn't you know it, I found myself out of coconut.  So I looked up a banana bread recipe in my America's Test Kitchen cookbook, mixed up some ingredients, and poured the results into a muffin pan.  We were eating them 25 minutes later.

My favorite part of banana bread is not actually the cakey interior.  The best part of banana bread to me is the crust, specifically the top of the crust where it splits as it rises, and what results is twin peaks of sweet brown crust that surround a small valley of gooey, sticky banana deliciousness.  Am I alone in this?  It doesn't matter.  All I know is that yesterday, I made twelve of those.  Best idea I've had all week.

Someday soon I will make my famous coconut banana bread and blog about it, because these recipes actually yield somewhat different textures.  My usual recipe is pretty cakey, whereas this one was a little lighter and airier.  Perfect for a muffin, if you ask me.

Let me say at the outset that I'm the kind of cook that uses only one bowl when I bake.  I'm not washing two mixing bowls just so I can sift out the dry ingredients.  I hope you're still willing to read my blog despite that confession.

Preheat the oven to 350 degrees.  Combine the butter, sugar, eggs, yogurt, bananas, and vanilla extract in a medium mixing bowl.  You'll want to use a potato masher, or something similar, for the bananas.  I like some bigger chunks of banana in my bread, so I don't spend too much time mashing.  After the first set of ingredients is well blended, add the flour, baking soda, and salt, and stir just until the dry flour is gone.  Spoon the mixture evenly into the greased cups of a muffin pan and bake for 20 minutes.  Yum.
Posted by beckim82 at 2:43 PM No comments:

The Complete Book of Pasta and Noodles from America's Test Kitchen

How to Cook Everything Vegetarian by Mark Bittman

The Omnivore's Dilemma by Michael Pollan

Thai: The Essence of Asian Cooking by Judy Bastyra and Becky Johnson